Man who ‘hacked’ woman, son with machete-like weapon gets 26 years 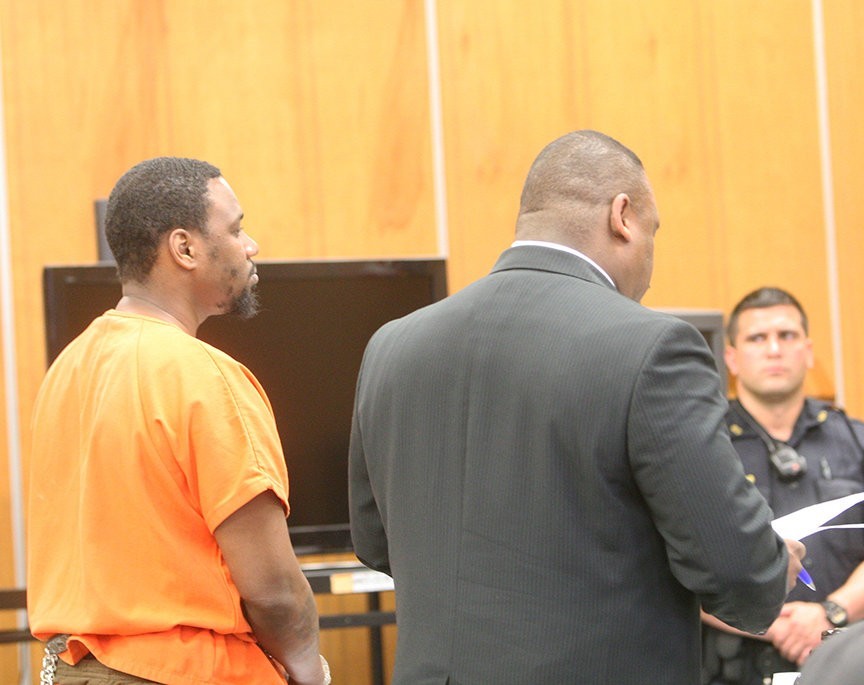 Matthew D. Rolle of Penns Grove was sentenced to 26 years in state prison Friday, June 24, 2016, for attacking and seriously injuring a man and his mother in Penns Grove with what has been described as a “machete-like” weapon. Rolle, left, is seen in Superior Court in Salem at his sentencing with his defense attorney Joseph Neal.

A man who used a machete-like weapon to viciously attack a man and his mother in Penns Grove has been sentenced to 26 years in state prison.

He “hacked, struck, chopped” the victims on the night in early 2015, Salem County Assistant Prosecutor Chris Goodwin told the court.

Matthew Rolle, 32, of Penns Grove, was sentenced for the assault on Christopher Hill and his mother, Rosemary Hill, by Superior Court Judge Benjamin Telsey Friday.

Rolle went to trial earlier this year and a jury found him guilty of aggravated assault and weapons charges.

However, the jury in April found him not guilty of the two most serious charges he faced — attempted murder.

Telsey sentenced Rolle to 17 years for the attack on Christopher Hill, the most seriously injured, and nine years in prison for the wounding of Rosemary Hill.

Rolle most serve those sentences consecutively, despite his defense attorney, Joseph Neal, arguing against that.

At the sentencing it was described how there was some sort of confrontation between Christopher Hill and Rolle on Walnut Street in Penns Grove on March 16, 2015.

Christopher Hill turned around to leave was struck in the back of his skull by the weapon by Rolle and then when Hill turned around, he was hit twice in the face, the weapon cutting him and fracturing his notes and upper jaw, Goodwin recounted. Hill then fell to the ground.

At that time Rosemary Hill intervened and she was attacked by Rolle, the weapon was used with such force against her that it cut through her braided hair, fractured her skull and bruised her brain, Goodwin said.

Then Rolle struck Christopher Hill again on the ground until Hill somehow managed to get up and run.

The attacks also left both of the Hills with numerous other cuts.

The mother and son were taken to The Memorial Hospital of Salem County in Mannington Township and then transferred to Cooper Medical Center in Camden because of the severity of their wounds.

After reviewing Rolle’s past criminal record Telsey agreed with prosecutors and sentenced Rolle under the state’s persistent.

The judge said it “took hours” to write down all of Rolle’s contacts with the justice system from his first offense as a juvenile in July 1998 through the present time.

Telsey read off Rolle’s extensive criminal history to the courtroom.

It was noted that some of the longest periods when Rolle had no contact with local law enforcement was when he was in prison.

Victim Christopher Hill, who was present at the sentencing, declined an offer to speak before Rolle was sentenced.

A handcuffed and shackled Rolle, who said he once coached youth football, read a letter to the court.

“We are all familiar with the phrase ‘all good things must come to the end’ and it did when this case emerged,” he said.

Neal asked the court to not impose the maximum sentence on Rolle saying he was a “family man” with a wife and six children.

Telsey also rejected two motions from Neal for a new trial for Rolle. Neal claimed that the description of the weapon as being machete-like may have prejudiced the jury.

Goodwin questioned why, since that term had been used all through the trial, that Neal only objected to to after Rolle was convicted.

Neal had also claimed there was a rumor that Christopher Hill was forced to testify against Rolle or face a financial loss.

Telsey said the claim appears to be nothing put “a made up story.”

The weapon in the case was never recovered. But from the type of injuries sustained by the Hills and from eyewitness accounts the night of the attack.

Members of Rolle’s family were also in the courtroom gallery.