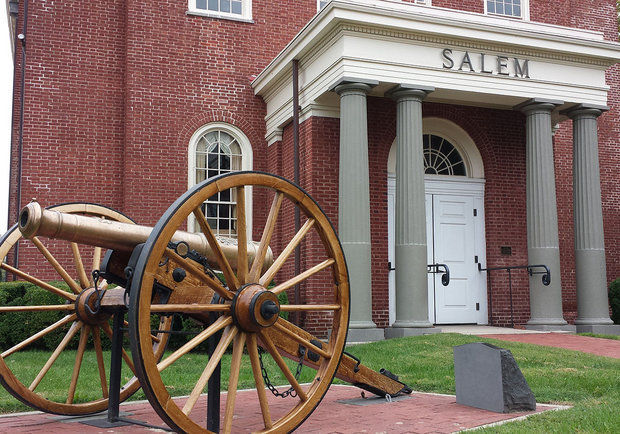 Police officers are called to a lot of traumatizing scenes. Whether it’s a fatal accident or a homicide, they have to do their job and investigate the situation often while talking with a victim’s family.

With hopes of replicating programs in place throughout the state, the Salem County Prosecutor’s Office hopes to begin a police chaplains program to assist with these situations and help establish a better bond between law enforcement and the community.

Salem County Prosecutor John T. Lenahan said seeing the program work in other areas made him see that it’s something Salem County should have as well.

“We thought it would be good because it’s working in 40 other municipalities in the state,” he said. “I spoke with the Cumberland County Prosecutor and the Atlatntic County Prosecutor. They have it in Atlantic City and in Bridgeton, Millville and Vineland.”

The Police Chaplain Program was started in Vineland by Rev. Gary Holden, who remains the head chaplain with the Vineland Police Department. Holden gave a presentation to the members Salem City Ministerium to fill them in on the program and try to drum up some interest from possible recruits.

Lenahan said chaplains provide a number of services for the community and law enforcement. Although it’s a volunteer position, the chaplains must go through training and stay active a certain amount of hours to maintain their certifications.

“This isn’t ceremonial,” Lenahan said. “They go on ride alongs. They respond to scenes.”

The chaplains are notified by 9-1-1 dispatchers just like emergency personnel if they are needed at a critical incident. Once they get there, they can provide counseling to people and free up police officers to do police work.

One of the clergy members leading the way on the Salem County program is Rev. Kevin Peterson, Pastor of Second Baptist Church of Pedricktown. Peterson was a police officer for 25 years in Pleasantville, and he took the chaplain training course when his department joined the program a few years before his retirement. He said when clergy are available at the scene of a critical incident, they can provide people with some guidance at a difficult time.

“We would go to everything from car accidents, fatalities, shootings,” he said. “You have to be able to help people get settled and help them not to react to what has taken place.”

He said police don’t have the same kind of training in counseling, which is what the chaplains specialize in.

Chief County Detectives Brian Facemyer said the chaplains can also help do special programs called “station house adjustments,” a diversion program that provides counseling to youth that might get in trouble. If they complete the program, they can avoid having the charge remain on their record.

Lenahan said the program isn’t limited to one denomination or religion, and any ordained member of any religion is welcome to join. It’s all about making meaningful connections, not about spreading the teachings of a certain belief.

“This isn’t a program to espouse the virtues of the Catholic Church, the Presbyterian Church or Islam,” he said. “You’re a chaplain separate from religion.”

Having clergy members — who are already established and known to residents — out in the community is also a way to ease tensions in hectic situations and help mend relationships between regular people and law enforcement, said Facemyer. In instances like domestic calls, just the presence of chaplains can help to keep things in check.

“The presence of a chaplain can calm a situation,” he said. “Having just an officer there, it may just continue to go on.”

Peterson said the program helps bridge a gap between the community and police.

“If you see your clergy member interacting with police, you try to personalize with the police,” he said. “After 25 years as an officer, I saw that there’s too much of a wall of ‘us and them.’ This helps heal and eliminate that wall. We’re there for the people.”

He also made it clear that having the chaplains could be beneficial to the officers themselves.

“They’re assimilated in the department, and they can familiarize themselves with officers,” he said. “Their counseling skills can get important for officers as well.”

Peterson said he would regularly meet with other officers when he was still with the Pleasantville Police Department.

“My office became a sanctuary,” he said. “There are so many situations that they don’t know how to handle, and they don’t want to show a sign of weakness,” he said. “Once they get to know the clergy, they can come to them and talk. Even now, the doors to my church are open to any officers that needs to talk.”

Lenahan hopes to get the chaplain program started in every independent police department in the county, but said that both Salem and Carneys Point seem to have a leg up on the other departments.

“They seem like they’re going to be the blueprints,” he said. “But there’s been a high level of interest in other municipalities.”

The prosecutor’s office is planning on holding the training at the beginning of May and hopes to get as many clergy members on board as possible. Lenahan said creating connections with the community can only benefit everyone involved.

“There’s a wide range of benefits associated with having the chaplains program in place,” he said. “It’s even beneficial to clergy because it gives them an opportunity to be out in the community to talk to people they otherwise wouldn’t have had the chance to talk to. It’s a win-win.”