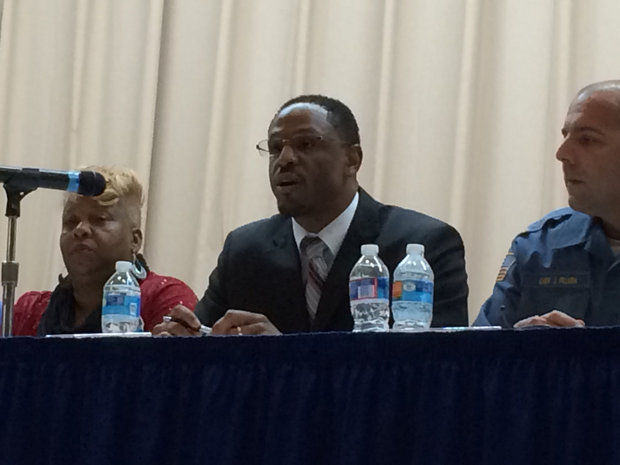 Members of the task force detailed some of their successes in the six months since they last met with the public, as well as gave information on the programs they provide for city residents.

Members from the groups that specialize in each of those areas were all on hand to address the community and answer questions.

“Each one of these people up here have partnered with me to effect positive change,” Washington said. “These are real relationships that have been fostered, and we’re working diligently to do our part.”

Dr. Patrick Michel, superintendant of the Salem City School District, talked about the strides the district has made since he took over.

He said Salem High School offers more advanced placement courses than any other high school in the county, and it’s the only one that offers the prestigious International Baccalaureate program, a rigorous program that prepares students for the tough work ahead of them in college.

The program also offers students the chance to travel and meet international students at a world conference.

“Last year, they went to McGill Universtity in Canada,” Michel said. “That might seem like a small thing, but all of the students, except one, it was the first time they ever got a passport. For most of the kids, it was their first time traveling outside the country and getting on a plane.”

Glen Donelson, executive director of Mid-Atlantic Career and Education Center, said his organization recently opened a new facility in Salem and hopes to grow the number of programs offered to city residents.

“We have placed 3,000 people into employment,” he said. “We know that about 80-percent are still employed, and we think that’s extremely important.”

They’ve even done something to help people in Salem County get to their jobs once they’re placed.

Derek Gatling, manager of community affairs for Mid-Atlantic, said more than 60 people have been able to get jobs since they started their shuttle bus program.

The shuttle starts out on the eastern side of Salem, then travels through town before going on to Pennsville and Penns Grove and ends at Pureland Industrial Park and Commodore Business Park in Gloucester County. It makes that trip for all three shifts, every day of the week.

“We’ve 12 or 13 people this year,” Gatling said. “We’re still in the process of getting more people employed, but ridership has increased exponentially.”

Chief of County Detectives Brian Facemyer of the Salem County Prosecutor’s Office and Salem City Police Chief John A. Pelura III were both at the symposium to discuss how their respective departments lend a hand in the area of public safety.

Pelura said they participate in two initiatives aimed at helping keep people out of the criminal justice system and out of jail.

The program for juveniles is called the Station House Adjustment Program and keeps kid’s records clean if they follow some steps.

“If a juvenile has committed an offense, we can keep that child out of the system,” he said. “The parents, the police, the victim and the juvenile all have to be on board. … There’s counseling and in-home programs to teach them that what they did was wrong and how to correct it. If they complete it, they remain out of the system.”

The Salem Police Department also takes part in the presumptive ROR program, which allows adults arrested on warrants for less than $500 to be processed and released without spending the night in jail.

Facemyer said the prosecutor’s office assists the understaffed Salem Police Department by providing daily manpower in the form of four detectives that work in quality of life details, such as search warrants.

Both said they focus on several initiatives that go beyond everyday police work.

Facemyer said the prosecutor’s office is hoping to start a police chaplain program, where local clergy members counsel officers, and ride along so they can be out in the community in critical times. Pelura said he hopes to reintroduce the D.A.R.E. program in Salem City.

Both agencies will be taking part in the annual Diverstiy In Law Enforcement Academy, a summer program for high school students.

“It exposes youth to career opportunities in law enforcement,” Facemyer said. “It really gives them a taste of what we do.”

The United Way of Salem County is heading up the youth development arm of the task force, and Executive Director Monique Chadband was at the symposium to offer some information on their various programs.

She said the United Way wants to focus on growing youth from the cradle to a career, and they have different initiatives that target younger kids, as well as teenagers.

“We have a teen, after-school program where we have young people come in and learn about basic life skills,” she said. “We teach young people about the stock market, about managing and investing their money. We teach them to aspire to something greater than what they see around the neighborhood.”

She said with the United Way’s recent merger with the John B. Campbell Center has allowed them to start a youth basketball league that has more than 150 participants.

“We have eight games every Saturday, and there’s a sense of community we see every week,” she said. “(Family members) are always happy to see their kids on the court, and the love and support we see from the community volunteers, who are teaching kids critical life skills, has been great.”