What happens when you text a tip to N.J. police? 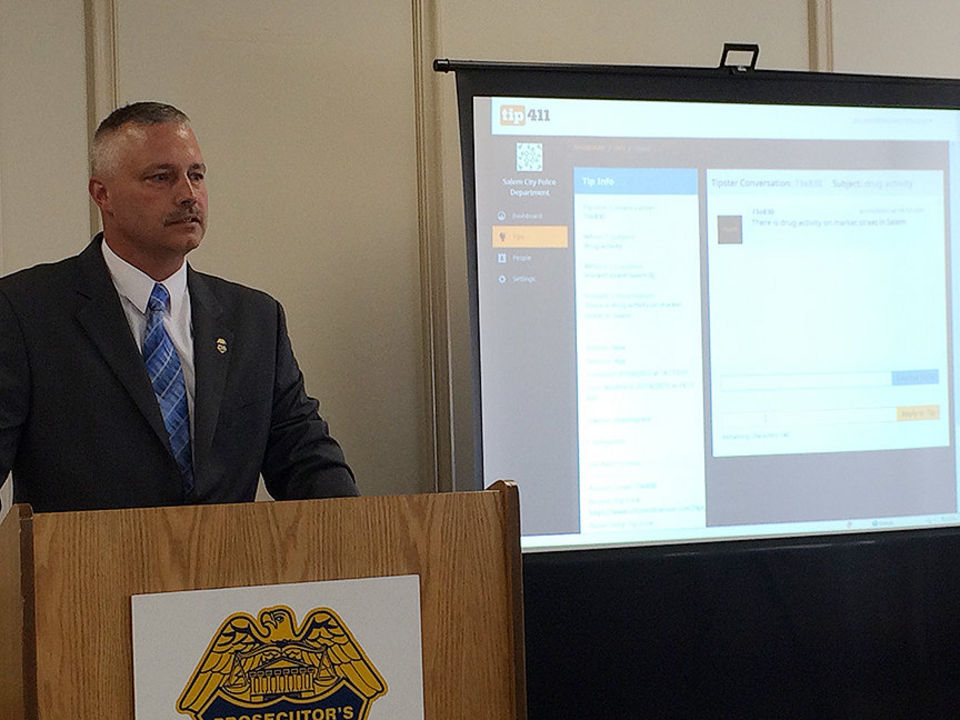 Salem County law enforcement launched the use of the “tip411” system Thursday, July 16, 2015. The system will allow residents to provide anonymous crime tips to all police departments that cover Salem County.

By Bill Gallo Jr. for NJ.com

There’s drug activity. A neighbor is committing insurance fraud.  There’s fear someone has been abused.

Do the right thing and report it to police via text message, or think twice?

Will the police track the text and turn up demanding more information?

Will the identity or phone number of the person providing the tip get out and criminals will track them down?

The answer to all is “no,” authorities said.

With the new “tip411” system introduced by the Salem County Prosecutor’s Office on Thursday, not even a subpoena can help.

Throughout New Jersey, police use different systems to ask for the public ‘s help in solving crimes, but many who have valuable information are still wary.

“We believe the public is our greatest law enforcement resource,” said Salem County Prosecutor John T. Lenahan Thursday.  “Tip411 allows a safe and secure way for community members to share important information with police without fear or retribution.  By providing this service to each department, citizens can communicate with their own department to collectively solve crimes in their communities.”

How sure can someone be that they will remain anonymous?

Chief of County Detectives Brian Facemyer said that when a text is sent via tip411, all identifying information is removed before the information is forwarded to individual police departments.

Subpoenas have even been issued in an attempt to find information on tipsters, but to no avail.

Citizen Observer, a St. Paul, Minn., company is the firm that Salem County contracted with for the service used in more than 1,200 towns across the U.S..

The system also lets police respond back to the tipster creating an anonymous two-way conversation. Besides sending words, photos and videos can also be sent to police.

Each police department will have someone assigned to handle incoming tips.

Smartphone users can download the Salem County tip411 app for free by searching SCCrimeTips on the App Store or the Google Play Store.

Anyone with a cell phone may send an anonymous tip to any Salem County law enforcement agency by using the keyword for the agency and their message/tip to847411 (tip411).

“Most of our crimes are solved by the public,” said Cummings. “This is going to be a great tool for us.”

Many have emphasized that this will be a way that those who have been afraid to speak up finally can.

Vineland Chief of Police Timothy Codispoti said Thursday that tip411 has been an asset for police in his city.

He said the main job is getting the word out about tip411 to residents and the fact that they remain anonymous when they provide information.

“The results are better and better as more people become aware of it,” Codispoti said of the system which has been in effect in Vineland for about two years.

“One of the selling points is that people can send in tips and remain anonymous,” the chief said. “People have taken advantage of that and we have used their information. It has been an asset.”

In addition to smart phones, links to the new tip system will be on local department Facebook pages and websites. And the case will be the same — tipsters will remain completely anonymous.

In Gloucester County, officials say their anonymous tip system has brought in plenty of information, in fact, hundreds of tips since it began in 2010, officials say.

While information provided to police remains anonymous, the tipsters can, if they wish, provide their contact information to police.

In Camden County, meanwhile, the prosecutor’s office there is assessing whether to continue its crime tip system.

In Salem County, this new system is not a replacement for calling 911, Lenahan emphasized. If someone is witnessing a crime in progress they need to call 911.

The law enforcement agencies already have the computers they need to use the system.

Maybe the best part of the deal is the new system designed to solve crimes is being paid for with money from the Salem County Prosecutor’s Office’s forfeiture fund — money confiscated from criminals.

For those using the Salem County tip411 system , the department keywords are: