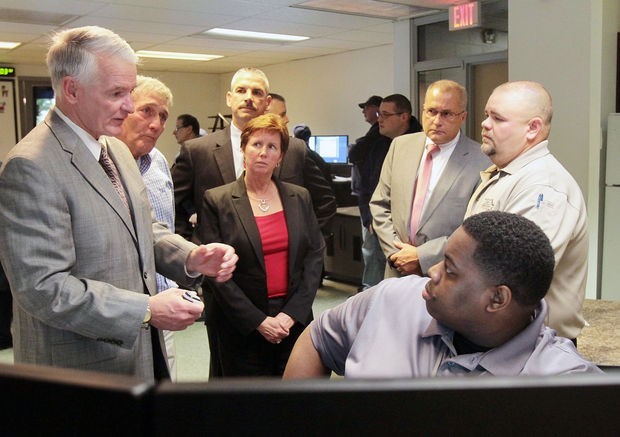 The overhaul will put all three phases of 9-1-1 dispatch — police, fire and ambulance — under one roof.

Officials said the project has been years in the making and hope to have the entire system up and running at full capacity by the middle of the year.

Here are four improvements that will make emergency dispatch easier and the county safer into 2015 and beyond:

John Cuzzupe, Salem County Undersheriff and Director of the 9-1-1 Center, said as simple as it sounds, the new desks and chairs are a big part of the update.

“The new ergonomic furniture is state of the art in comfort and allow the PSTs (public safety telecomunicators) to better do their jobs,” he said. The new PST stations each have four widescreen computer monitors, allowing them to keep all of the necessary information in front of them as they answer emergency calls from throughout the county.

Along with the new furnishing comes a much needed update to the center’s computer systems and software. All of the information the PSTs need are just a click away, allowing them to know exactly the right procedure to go through for any kind of emergency call imaginable.

In the coming months, Salem County Sheriff Chuck Miller said they will be upgrading their computer assisted dispatch program, allowing them to better communicate with the different municipalities around the county.

As the renovations were underway at the Cemetery Road facility, an upgrade was being made to the radio network by adding several new towers across the county. With towers in Quinton, Oldmans and Pennsville added to the existing ones in Penns Grove, Woodstown and Pittsgrove, the county now has nearly complete coverage, making communication easier for emergency personnel.

Cuzzupe said Salem County is the first county in the state to have all three emergency services dispatching from under one roof.

“John has the room set up so the senior PST is back and forth between fire, EMS and police,” Miller said. That way, he explained, everyone is aware of what is going on.

“There’s a universality to it,” he said. “There’s the same systems, same phones, same procedures.”

Miller said they are happy to see the progress at the center, and they are excited to see what opportunities it presents to them in the future.

“The beauty is we have a foundation to grow off of,” he said.