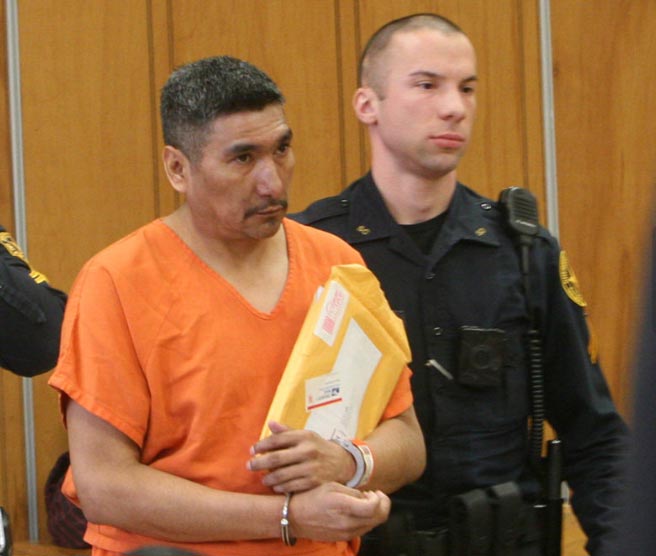 A man who admitted Tuesday to dumping a South Jersey teenager’s body along a rural Salem County road is facing three years in state prison.

He left the body of Danyelle Minerva, 19, of Atco along the Alloway-Woodstown Road in Alloway Township after she died at his Bridgeton home in October 2015.

Minerva’s family had desperately tried in vain to locate her after they lost contact with her. It would be three months before her remains were discovered.

“I’m glad it’s almost over,” said Denise Arnieri, Minerva’s aunt and one of the family members who have attended each court hearing. “Hopefully when the sentencing phase is done we can get some closure.”

A court interpreter translated the proceedings from English to Spanish for Sosa-Ayala, a citizen of Mexico.

Telsey said he wanted it to be clear Sosa-Ayala understood everything going on in court and the fact that after he finishes time in a state prison he may be facing deportation.

Through his interpreter, he said he understood.

Defense Attorney Leslie McNair-Jackson provided a narrative of the circumstances surrounding Minerva’s death and Sosa-Ayala’s disposal of her body.

Sosa-Ayala agreed that that he had brought Minerva to his home in Bridgeton on Oct. 16, 2015 and that they both fell asleep.

When he woke up, he found she was not breathing and he believed she was dead.

He was frightened and wrapped her in a sheet and then took her to Alloway Township in neighboring Salem County where he dumped her body in a wooded area near the road.

It wasn’t until Jan. 11, 2016 that tree trimmers working in the area discovered her decomposed remains

Not long afterward Sosa-Ayala was arrested along with another man in the case.

The exact circumstances of Minerva’s death have never been spelled out by authorities. An autopsy was inconclusive.

On Tuesday, Sosa-Ayala agreed to take the plea arrangement with the Salem County Prosecutor’s Office of guilty to a third-degree charge of desecration of human remains and give up heading to trial.

After he finishes that sentence, he faces deportation back to Mexico, officials said.

In an earlier court appearances, Sosa-Ayala had balked at the plea deal offered by the Salem County Prosecutor’s Office — three years in state prison for admitting his guilt.

In his last date in court, McNair-Jackson, said Sosa-Ayala needed to talk over the offer with his family.

For Minerva’s family, there are still many unanswered questions.

“I’m not buying what he says,” Arnieri said after court Tuesday. “We’ll never know what happened. I think he’s getting off easy.”

The fact Minerva’s body was just left by a roadside still deeply hurts the family.

Minerva’s uncle, Frank Arnieri, praised both the New Jersey State Police and the Salem County Prosecutor’s Office for their diligence in solving the case.

“Exceptional,” he said of their work — and support for the family.

Still, Frank Arnieri said, the loss of his niece is something the family will never get over.

“We’re never going to get her back.”

Sosa-Ayala’s sentencing was scheduled by Telsey for April 7.